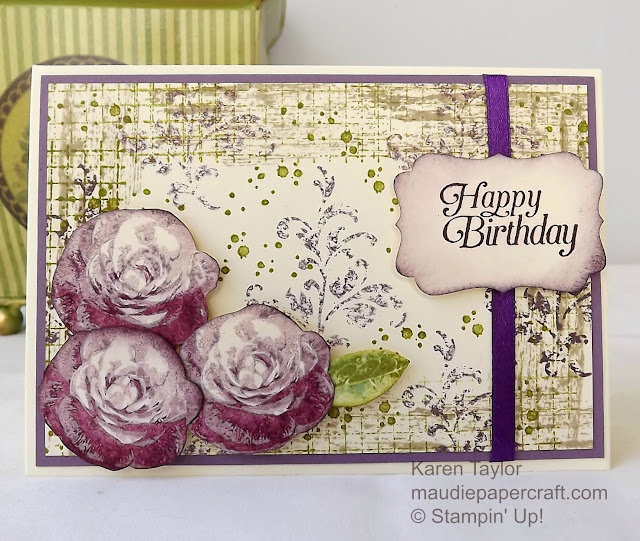 This is a card that I made up as I went along - I had no idea how it was going to look.

Is it possible to forex 100 dollars in one month?

But I was so pleased with the finished result that I made more in different colours.

I originally wanted to have a real play with the new Timesless Textures stamp set. Like its sister Gorgeous Grunge, it's great for backgrounds.

I had stamped and cut out some flowers from the Picture Perfect set so I decided to put them together so see how they looked, and loved the result. 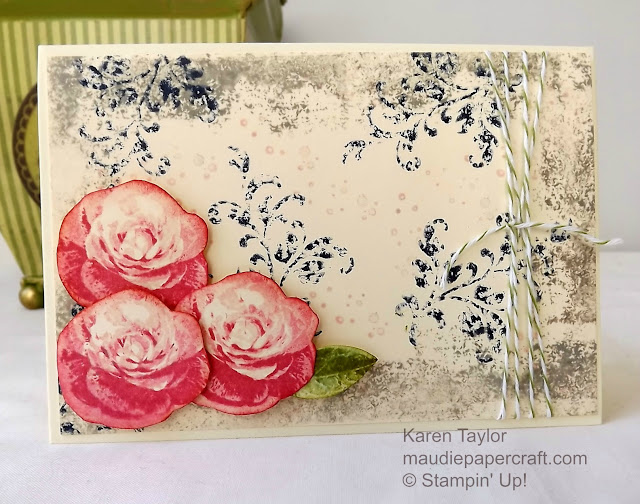 I liked the Picture Perfect flowers better on Very Vanilla cardstock. I've used neutral Crumb Cake and Sahara Sand ink for outsides of the layer and contrasting inks for the rest. I was especially pleased with the leaves which I used Mint Macaron and Old Olive for, stamping off the Old Olive for one of the layers. 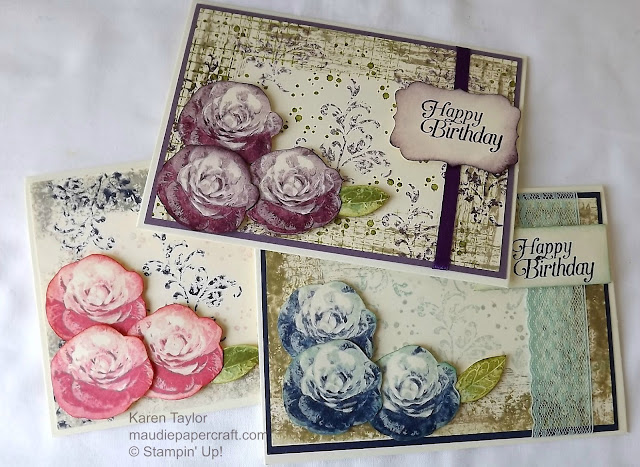 There are lots of colour combinations you could use here, and I'm sure I'll be making more of these cards. A little tip - if you've cut out a stamped image as I have here, try sponging around the edges to soften them, it will make the image look much better.

Posted by Karen Taylor at 10:02 No comments:

Stampin' Up! Botanicals For You cards 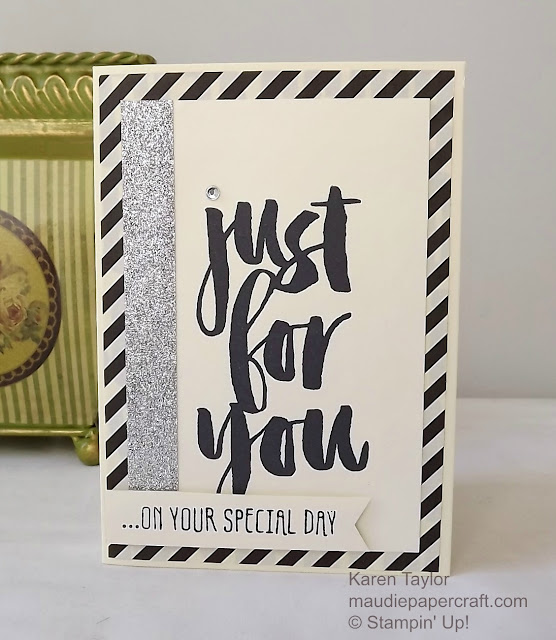 Sometimes you need a card that isn't overtly masculine, but isn't too colourful either. So I thought this monochrome card might fit the bill - you could use it for a man or a woman, there's just enough bling but not too much. It's kind of understated I think.

It's made using the Botanicals For You stamp set which is FREE during Sale-a-bration. Only a couple of weeks to go now to get your free items for every €60/£45 you spend. You have until the 31st March to grab your freebies, after that it's all over.

This card also has some of the free glitter tape - I love that tape!

So, after I had made a monochrome card, I thought I better make a floral card too: 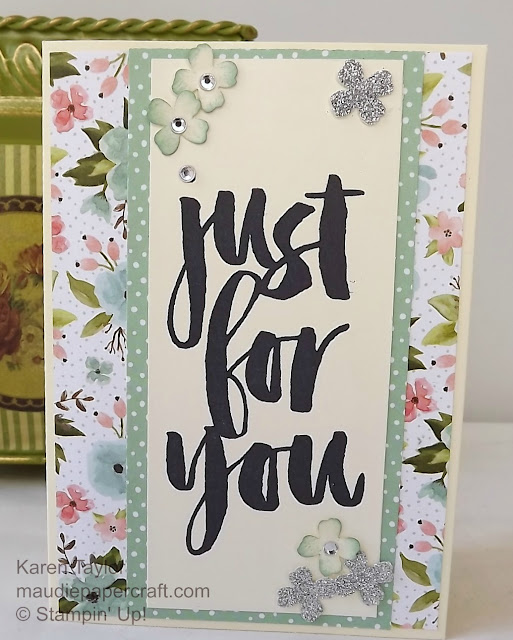 As you can see it's the same but different. By using different DSP, and adding few punched flowers the card changes completely.

Just a heads up that I will be at the AIKB Easter Fair on Easter Monday (28 March) at Gouarec: I hope to see some of you there! 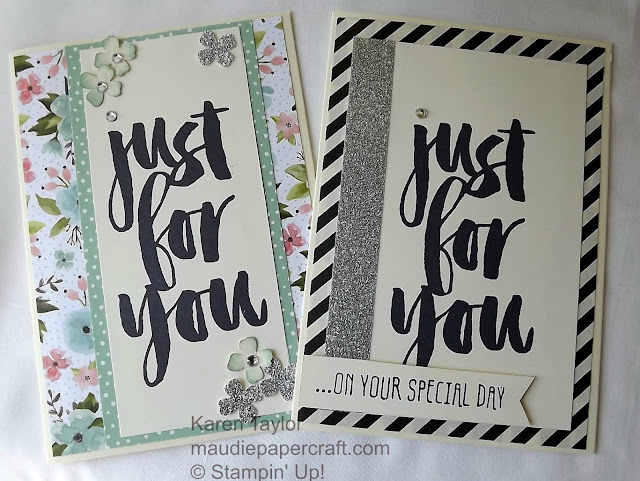 Posted by Karen Taylor at 11:00 No comments:

Email ThisBlogThis!Share to TwitterShare to FacebookShare to Pinterest
Labels: Botanicals For You, cards, Glitter Tape, Stampin Up! 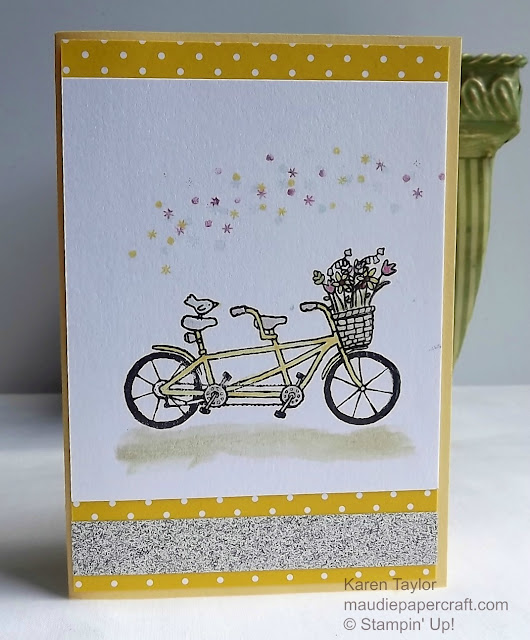 So, Sale-a-bration lasts until the end of the month,, March 31st. Every year Stampin' Up! has a special 3 month offer where you can earn FREE products for every €60/£45 you spend.

This card features two of the products you can earn. The tandem stamp, including the basket, flowers, and bird are from the Pedal Pusher stamp set.

And the silver glitter is from a set of three tapes - gold, silver and sparkly white - that are also Sale-a-bration items. You can only get them FREE! How good is that. 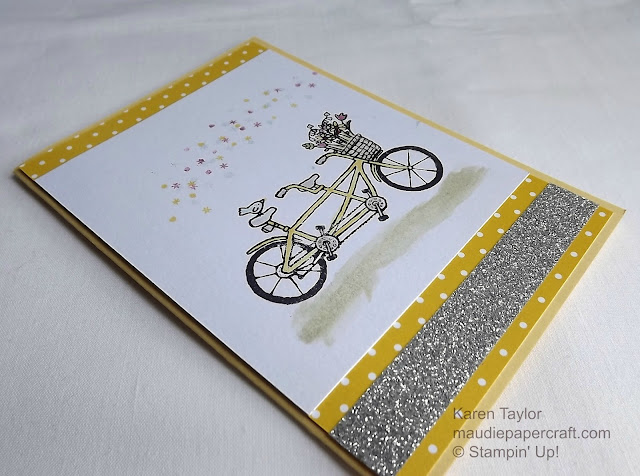 Stampin' Up! have produced a video showcasing the glitter tape:

If you'd like more information about how to get your FREE items please contact me - that's one item for every €60/£45 you spend, so the more you spend, the more items you can get.

Posted by Karen Taylor at 09:51 No comments: 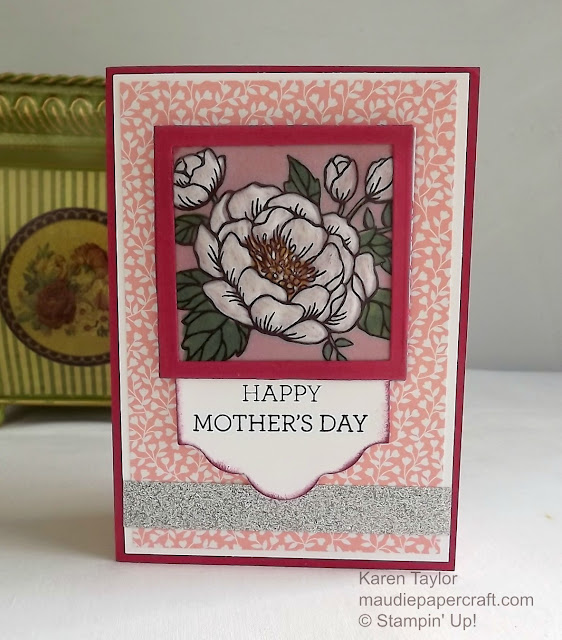 I first saw this beautiful technique for embossing vellum on Deb Valder's blog and thought it looked stunning. The great thing about it is that it's so easy to do!

I first stamped the rose from the Birthday Blooms stamp set with Stazon onto some Stampin' Up! vellum. Then, when it was dry, I turned it over, and used a stylus to start 'colouring' in the flower on the back, using circular movements. If you try this don't press too hard, rather go over the same place again. Magically the vellum will turn white in those places.

The leaves are also coloured on the back: I used a Cucumber Crush marker, and Delightful Dijon for the centre - both from the In Color Stampin' Write makers set

The card is Rose Red, and the DSP is from the Love Blossoms stack.

I think any Mother would be pleased to receive a card like this for Mother's day - although I sent my own Mum a different card! 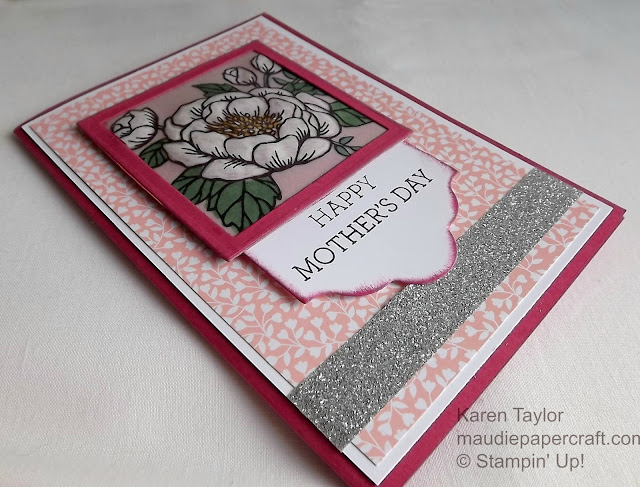 Posted by Karen Taylor at 12:23 No comments: 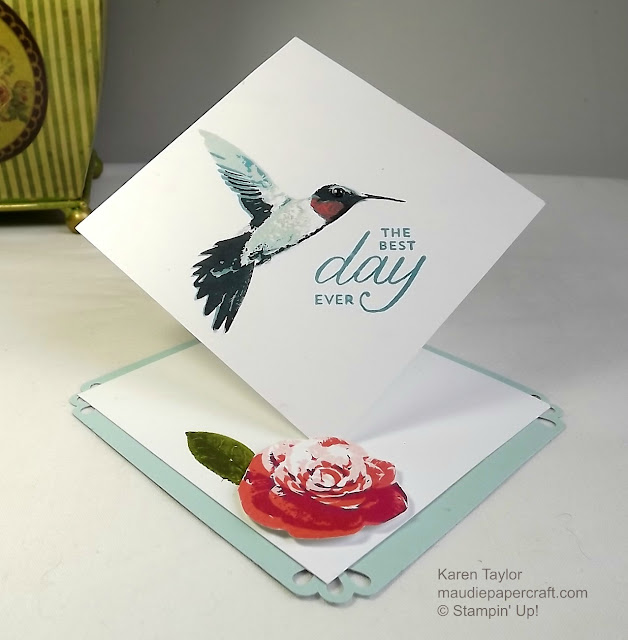 Today's post features a card that I absolutely love! It's so clever, and beautiful. I can stake no claim to it at all, because I have totally CASE'd it from Brenda Quintana's blog. If you follow the link you'll find how she made it.

You could use a different stamp set - this is Picture Perfect - but I was happy to follow Brenda's lead here because I think it suits the card perfectly.

It's an easel card, but a different orientation to normal. 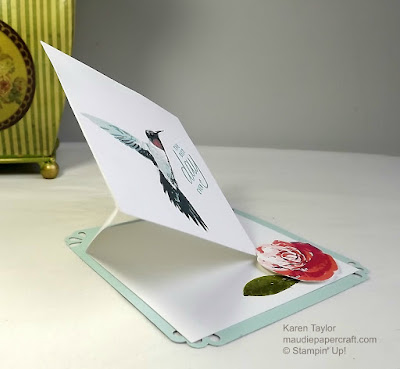 The good thing about it of course is that it folds flat to post.

Love it. Thanks Brenda! 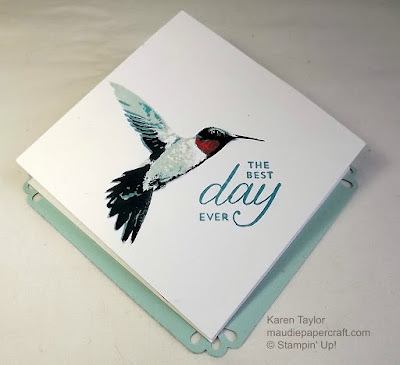 Posted by Karen Taylor at 12:57 No comments: 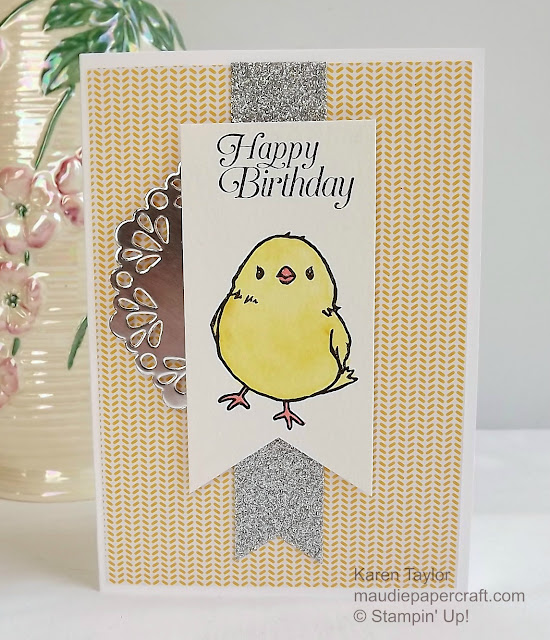 I haven't shown you many cards made with free Sale-a-bration items have I?

Sale-a-bration lasts until 31 March, and until then for EVERY €60/£45 you spend you get to choose a FREE item from the Sale-a-bration brochure.

This fun little chick comes from the Honeycomb Happiness set which also has an ice cream and balloons in it. 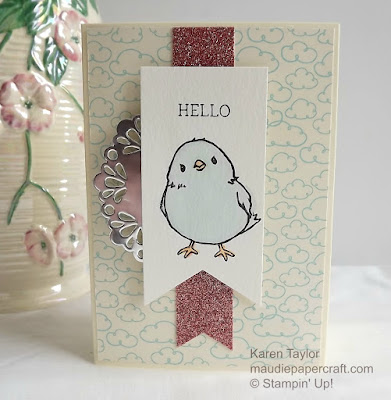 For these cards I've stamped the chick onto watercolour paper and coloured them in using Aquapainters and inkpads, then added some glimmer paper and silver doily in the background.

This last card I CASE'd from Pinterest (JANNY GRUITROOIJ made it originally). The chicks are fussy cut and stuck to some of the Birthday Bouquet DSP. 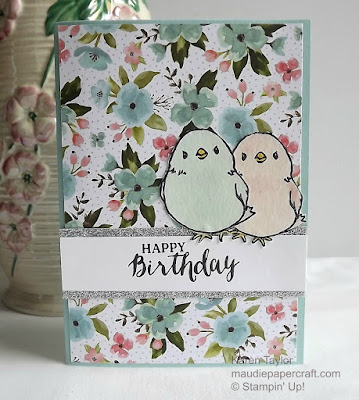 If you have any questions about Sale-a-bration, and how to get your FREE stamp sets please contact me.

Here's a reminder of the cards I made using the other stamps in the Honeycomb Happiness set too.

Posted by Karen Taylor at 10:23 No comments: 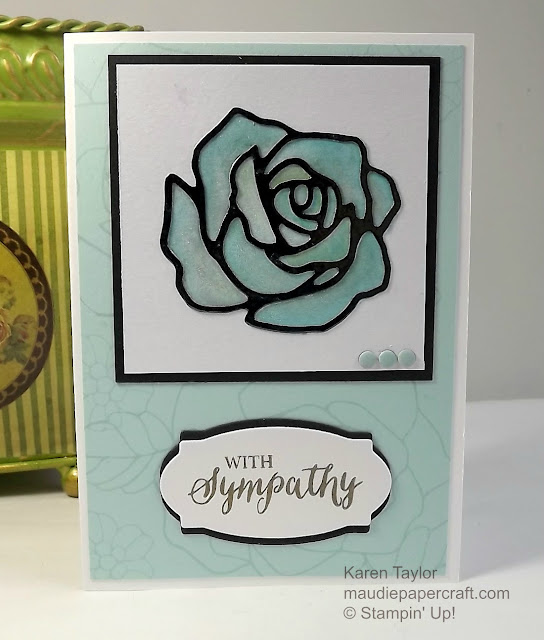 I've used a couple of different techniques for today's card. It uses the Rose Garden thinlits together with the Rose Wonder stamp set - which is available as a bundle with a 15% discount.

The whole set has some beautiful dies and stamps. Here I've used the smaller rose die to cut out a rose from foil card (not Stampin' Up!), then I've used an Aqua Painter and ink pads to colour in the rose. I used Soft Sky and Mint Macaron to vary the colour slightly on each petal. 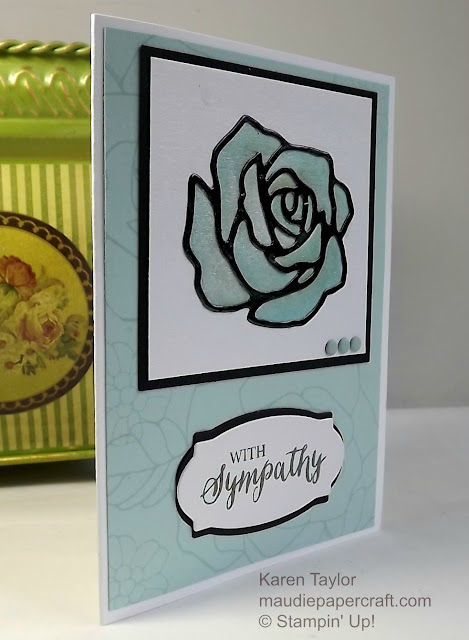 The background mat is Soft Sky card that I've stamped with the large rose stamp. Then I used the With Sympathy sentiment and die cut it with the banner die from the set.

There are so many sentiments in the Rose Wonder stamp set - birthday, sympathy, wedding, thank you, religious - enough to cover most things! 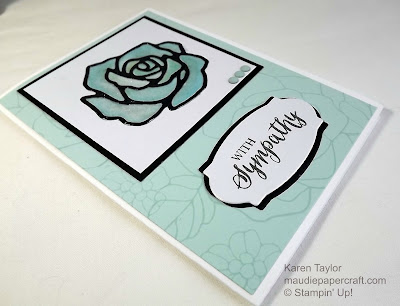 There lots of possibilities and techniques you could use with this bundle. I didn't know whether I'd use it much to start with, but now that I have it, I love it and know it will become a firm favourite.

Here are the products I used:

Here's what Stampin' Up! have done with the set:

Posted by Karen Taylor at 11:21 No comments: